The Next Tsunami explores how we know what we know about plate tectonics, the science of earthquakes and tsunamis generally, and the Cascadia Subduction Zone in particular. It follows the stories of such figures as German meteorologist Alfred Wegener, formulating his theory of continental drift while gazing at ice floes calving from Greenland glaciers, and geologist Brian Atwater, paddling his dented aluminum canoe up muddy coastal streams looking for layers of peat sandwiched between the sand and silt. The book begins and ends in Seaside, arguably the Northwest town with the most to lose from what Atwater characterizes as an "apocalyptic" disaster, and with Tom Horning, who grew up to become a geologist and who, in the early 1990s, returned to his family home at the mouth of the river in Seaside. No one in Seaside understands earthquake and tsunami science and politics, and the complicated psychology of living in a tsunami zone, better than he. And no one stands to lose more: his home will be among the first to go.

Read a blog post reflecting on the fiftieth anniversary of the 1964 earthquake and tsunami.

Living on a restless Coast

Henderson "covers a great deal of scientific ground while never losing sight of the human interest side of the story. As with [John] McPhee, there's poetry to her ground truthing too."

Thomas Hager, author of The Alchemy of Air

Buy it from OSU Press or your favorite bookstore

Amazon has it in  paperback and Kindle formats

In 1964, ten-year-old Tom Horning was nearly swept out to sea by a tsunami at Seaside, on the northern Oregon coast. Since then, scientists have discovered a 10,000-year record of infrequent but massive earthquakes and tsunamis along the Pacific Northwest coast. When the next tsunami slams the coastline between Vancouver Island and Eureka, California, it will be the biggest natural disaster in the history of the United States. 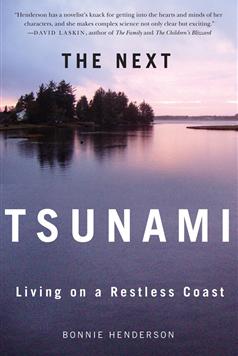 "Brilliantly written ... The depth of reportage is impressive." William Dietrich

"It's non-fiction writing of the calibre of authors like Margaret MacMillan, Margaret Visser and Susan Orlean." Maclean's

"Henderson has a novelist's knack of getting into the hearts and minds of her 'characters,' and she makes complex science not only clear but exciting." David Laskin